What an incredible first six months in the new garden.  We moved onto the property June of last year.  We were able to get in some late summer plantings and fall crop that I planted in a 20 x 10’ plot until the garden fence was built.  That area expanded to a 105’ x 45’ plot after getting the fence built.

This has definitely been a year of building many things that fortunately will be one time investments of time and money.  Some of those investments were building out the following:

Wow, just reflecting on this makes me tired.  This does not include all the other tasks like seedling trays, planting seed in the garden and all the tasks that follow up until harvesting.

In addition to building out the garden, we had a centerpiece purchased for the garden.  This centerpiece is a hightop cement picnic table that has a look of wood along with an umbrella for well needed shade during the heat of the day. 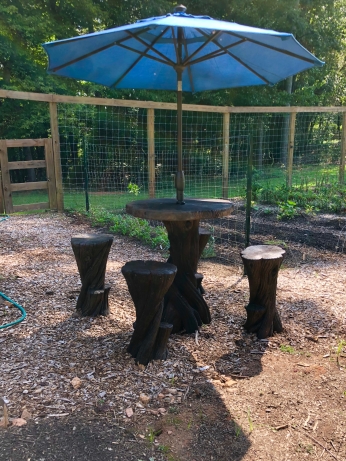 Staging the veggies on the table

Overall, very pleased with this year’s progress.  It has been a year of building things for the first time and investments that I will reap years of reward with vegetables grown in the upcoming years.

Peppers went especially well this year.  I think it is partially due to peppers seem to thrive in harsher conditions.  In particular, the Georgia Flame hot peppers and the flavorful Shishito peppers were bountiful (see the links for my seed sources).  For example, just last week I harvested over 200 of the Shishito peppers in one harvest and I have probably picked close to 400 before that.  I definitely over planted these, but I know these will be dependable vegetable as I transition into a Market or CSA Gardener.

As a part of expanding the garden, I got to experience the value of rich organic soil.  We had a small area that had darker (and apparently richer) soil compared to the rest of the garden.  The cucumber and asparagus showed big differences in health and size based on the quality of the soil.  This was not an experiment that I planned, but I was able to observe the difference higher quality soil had on the yield and health of the crop.  Below are a few pictures to illustrate this.  This has further inspired me to continue to focus on building soil through composting and letting the soil mature through following a no dig approach.  My goal is to have high quality organic compost incorporated in several inches of soil throughout the garden in 2 to 3 years of building soil through the no dig approach.

How rich compost has made a difference

What Were the Challenges

The key challenge this year was feeling that I was always one step behind with planting in the garden with all the other setup tasks that I had to intermingle with the planting.  I say it was a challenge and it was, but it was a fun challenge that energized me to get out to the garden frequently this year.  I looked forward (but at times anxiously) to get out in the garden to get past the next hurdle.

In terms of challenges with growing vegetables, I had a few challenges that are worth noting.  First was the massive infestation of Mexican bean beetles.  These suckers just would not let up after they entered the garden.  They got so bad that they would kill bush bean plants before they could get out the second set of true leaves.  Quite frustrating.

I also had some unsolved mysteries this year.  I had disappearing ears of corn and seedlings that appeared one day and were gone the next.  I am guessing that the ears of corn were victim to raccoons robbing in the cover of the night sky.  With the missing seedlings, I am guessing birds.  I cannot prove this, but tried my best with a trail camera in the garden.  I hope to eventually catch this on film.

What Would I do Different

For the first full year in the garden, I think things have gone better than expected.  You can always do better based on what you have learned.  That is the beauty of gardening.  That is, you can always learn and experience something new each year.

I do think I have a solution for both issues mentioned above (stolen corn and missing seedlings).  The issue with the corn might be solved by putting a simple perimeter fence made of deer netting to further protect the corn.  I have a second crop of corn growing now with some finished ears that have not been touched (yet).  For the disappearing seedlings, I will be putting down spun lace row cover over the seedling beds.  I also am growing seedlings in trays to get past the fragile seedling stage before putting into the garden.

One lesson, that I learned the hard way, was not getting my compost and wood chips dumped into the center area of the garden before building the 8 foot perimeter fence.  Big mistake that resulted in quite a bit of extra labor.  Also, I learned that I should have dump trucks enter my property when the ground is not soft.  If the ground is soft, have them dump from the street and have a bobcat move it to where it needs to be.

In summary, it has been quite the year for Iron Mountain Organics.  A year of building many foundational elements of the garden and I look forward to the extra time we will have to focus more time on the plantings.  I also expect that I will be putting more energy and time into creating a better environment that will invite beneficial insects into the garden.  This is the next big hurdle for me.  I will be sure to share with you all what I learn.

Co-Founder and President of ThreeWill. Big fan of Agile Software development. Other interests are healthy/organic living, spending time with family and photography. View all posts by Tommy Ryan

4 thoughts on “Musings of First 6 Months in the Garden”